If there was ever a moment for a call to action for climate change, it is in the wake of the COP26 conference. The global meeting of leaders, doers, and movement-makers saw new and varied community partnerships and announcements that push traditional boundaries and create cross-sector opportunities for many organizations and communities. We’ve compiled a list of some of the most compelling and promising ideas from across the education, nonprofit, business, and philanthropy sectors.

From the Malala Fund to the University of Maryland to LEGO, the momentum for climate-related change is just beginning — led by insights from children, women and girls, engineers, and investors. We are seeing a changing tide of those who care and are, as a result, getting involved. Now, we wait to see what will happen as emerging ideas turn into action.

If there was ever a moment for a call to action for climate change, it is in the wake of the COP26 conference.

During the COP26 meetings, the Malala Fund presented its Gender-Equal Green Learning Agenda, which recommends leaders use education as a powerful tool to address the climate crisis by adding climate issues to all school curriculums and vocational training. In particular, they should focus on equipping women with the skills and knowledge they need to actively participate in the green economy, work for climate action, and prepare for emergencies. The Agenda highlights the connections between girls’ education, gender equality, and climate change, and reveals the climate benefits that have already been demonstrated in regions where girls have equal access to learning.

The University of Maryland (UMD) has joined forces with the National Oceanic and Atmospheric Administration (NOAA) and the American Society of Civil Engineers (ASCE) to speed up the development of climate-smart engineering by integrating ​​NOAA-produced climate science into U.S. building codes and standards, which guide the design and construction of built infrastructure across the country. The goal is to reduce the impact of climate-linked disasters, such as floods, fires, and storms, on everything from bridges and buildings to stormwater management systems and utilities.

With the input of more than 6,000 children from around the world, LEGO has released a set of “Building instructions for a better world” that reflect what young people want to see happen in order to solve the climate crisis and ensure a brighter future for everyone. The 10 instructions are simple, as befits LEGO’s typical style, but incisive. They include such suggestions as “reduce pollution and waste,” “cooperate internationally to share knowledge and solutions,” “invest more in protecting the environment,” and “leaders, change your own behaviour and set examples.” The list was handed out to delegates at COP26, and LEGO hopes it will remind policy-makers to consider the future of the world’s children when making decisions. 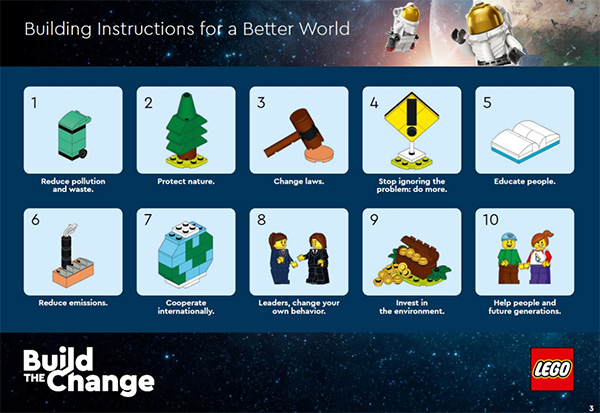 LEGO released a set of “Building instructions for a better world” that reflect what young people want to see happen in order to solve the climate crisis and ensure a brighter future for everyone.

The Global Energy Alliance for People and Planet is a new initiative to accelerate investment in renewable power and transitions to green energy in developing and emerging economies around the world. Led by anchor partners the Rockefeller Foundation, IKEA Foundation, and Bezos Earth Fund, and supported by development banks and international finance corporations, the Alliance hopes to make $100 billion in public and private capital available over the next 10 years to provide renewable energy to one billion people, reduce carbon emissions by four billion tons, and create 150 million jobs. The work will include technical support for policy and regulatory development and helping national governments identify and develop opportunities for transformation programs.

World leaders vowed to halt deforestation. So it is not surprising that school children across the United Kingdom helped to create a Forest of Promises — a pledge from children to our planet — during the COP26 conference. As part of the World Wildlife Fund’s #PromiseToThePlanet, which helps classroom teachers introduce the topic of climate change, the project invited students to make a leaf from paper, fabric, or another material, and write their promise to be kinder and more gentle to the planet on it. Some examples included walking or cycling to school rather than being driven; reducing food waste; increasing recycling; turning off lights when not in use; and conserving water. Classrooms were encouraged to share their completed forests on social media to encourage others to participate and send a message to world leaders that young people want climate action.

The biggest hope for COP26 is that the climate momentum does not end in Glasgow, but stays with us to see through the commitments and initiatives like the ones above.

Read more about COP26, and learn about how organizations support the climate agenda through our Stakeholder Impact Report. Take steps to get involved through 1T.org. 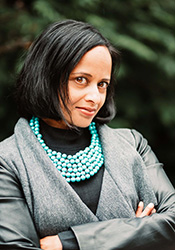 The post Following Through on Climate Commitments After COP26 appeared first on Salesforce.org.

Thu Dec 9 , 2021
The video sharing app TikTok is famous for its short lip sync videos, dance routines and humor. The app’s popularity soared during the pandemic.  TikTok is now producing it’s first live shopping and entertainment event where consumers can buy products directly on the platform, tapping into the ascending “social shopping”. […]