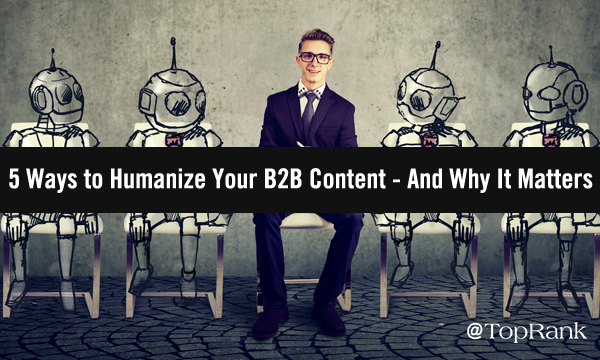 Never underestimate the corporate world’s ability to take something that should be intuitive, and make it weird by overthinking it.

Case in point: We used to say, “B2B doesn’t have to be boring.” Which indicates that for a long time, folks truly believed that B2B did have to be boring — that B2B buyers were a unique species of creature that operated without emotion and wanted the driest content possible.

Now we’re talking about how we need to “humanize” B2B content.  And doesn’t that sound like some kind of filter you run your content through after you make it? I picture something that looks like a fax machine, where you load the content in the top, and push a big red button marked “HUMANIZE.”

Now, I get that B2B brands are dealing with … Read more

Distributing COVID-19 vaccines to 5.6 billion people worldwide to reach global herd immunity is no small feat — and one that requires a commitment to innovation and cross-sector collaboration.

Since early 2020, the nonprofit, education, government, health, and corporate sectors have worked together like never before to manufacture an effective vaccine in record time. Now that safe and effective COVID-19 vaccines are available and countries, states, and local governments around the world are establishing vaccination programs, continued collaboration and strong digital infrastructures are essential for equitable and efficient distribution at scale.

BlackBerry (NYSE:BB), the iconic brand and forerunner to the smartphone, has had a tough few years. In 2008, the BlackBerry share price was trading as high as $145 a share, but by 2012 had spectacularly fallen from grace. In the 2020 March market crash, it fell below $3.

However, in the past two months, it has made a remarkable comeback. At the time of writing, Blackberry shares are trading at $22. So, does this mean it’s now a ‘must-buy’ tech stock with an exciting future ahead? Let’s not get ahead of ourselves.

Nowadays, BlackBerry is a software security firm rather than a smartphone manufacturer. Security is an increasingly vital part of our world, so there’s a clear need for such an offering. And, in the past few weeks, a few newsworthy announcements have helped to boost the BB share price.

2.9 million doses have been given at … Read more

Technology has affected all areas of our lives, including writing and content marketing.

So, how exactly is technology disrupting content marketing? Let’s see!

Creativity and technology have long had a love-hate relationship. Ever since we’ve become surrounded by smart gadgets that deliver us answers to any questions in a heartbeat, we’ve been wondering, “Is it a bad or a good thing for the brain?”

Our attention span is getting slower and our thirst for knowledge is getting lower (as many studies seem to confirm).

But there are many bright sides to advancing technology, including accessibility (i.e. tools making it possible for everyone to create), anonymity (and hence free idea sharing), and free access to information.

When it comes … Read more